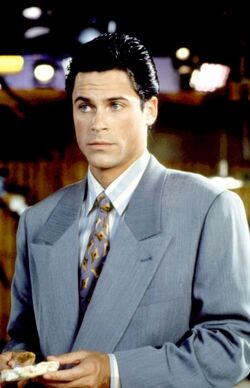 Benjamin Oliver is the main antagonist of Wayne's World. He is a smart, rich, handsome, but narcissistic man who buys Wayne's World for $10,000. He gets the show sponsored and makes some major adjustments to it then fires Wayne. Benjamin likes Wayne's girlfriend Cassandra and tries to steal her from Wayne. Benjamin drives a red 1966 Pontiac GTO convertible. Garth believes that If Benjamin were an ice cream flavor, he'd be Pralines and Dick. He is played by Rob Lowe

Community content is available under CC-BY-SA unless otherwise noted.
Advertisement