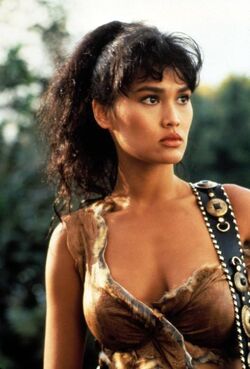 Cassandra Wong is the singer and bass guitarist for Crucial Taunt and Wayne's girlfriend. Cassandra met Wayne at the Gasworks after performing there. In Wayne's World, Benjamin Kane is attracted to Cassandra, and tries to steal her from Wayne. In the sad ending, they end up together, but in the Scooby Doo Ending and the Happy Ending, she is reunited with Wayne.

Cassandra appears to be much more intelligent than either Wayne or Garth. Her native language is Cantonese, which Wayne learns to speak in order to impress her after meeting her at the Gasworks.

Community content is available under CC-BY-SA unless otherwise noted.
Advertisement